In fact we should actually write about the former mill. Currently the building is a typical residential building. One is tempted to label it a loft apartment, which is arranged in former industrial edifice.
By the way – on some maps our Mill is described as industrial building without chimney. Now the chimney exists. And smokes. 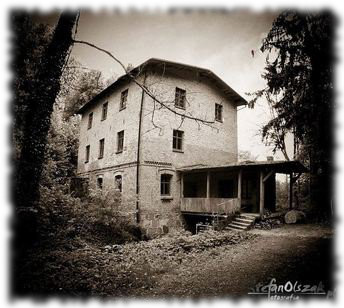 The Mill was built before 1935 by the Germans. After the war the Mill was taken over by the Polish local authorities and in 1957 expanded with two upper floors.
In 1997 small outhouse was built and small hydropower plant was launched in this outhouse.
The hydro turbine, which is used, was made by Schichau-Werke Elbing and it is the same turbine that propelled the machinery since the launch of the mill before World War II. 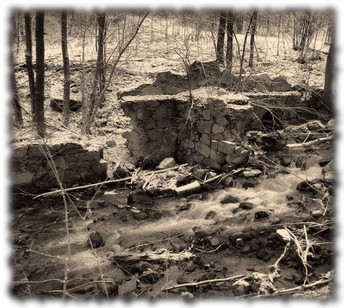 From conversations with residents of Trudna we know that over a distance of several hundred meters, in addition to our Mill, two more hydro-powered industrial plants were working: groats mill near the Trudna-Rozwory road (only remnants of walls survived near the bridge – see photo on right) and the distillery, located about 500m downstream from the Mill, which also did not survive the turmoil of World War II.
I will try to write more as soon as we get some informations.